Wings Of Fear by Helene Young 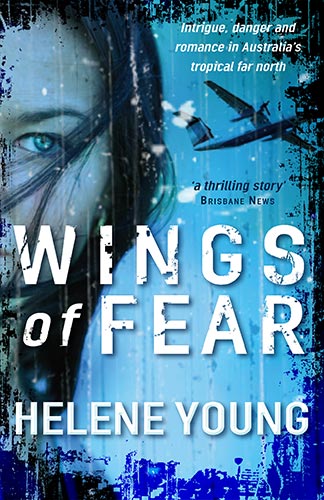 Author: Helene Young
Publisher: Hachette
Copyright Year: 2011
ISBN: 978 0 7336 2490 2 (pbk)
Review By: Yvonne Smith
Book Synopsis: Helene Young has set her novel in North Queensland. Captain Morgan Pentland is a feisty pilot in the Border Watch fleet covering the “top end” . Tightly held views stemming from memories of her difficult childhood and through a series of dangerous events, are put to the test in this well written first novel.

Morgan is happy in her achievements; her own house at Trinity Beach, independence, the closeness of her crew, her friendly neighbours and their shared beautiful red setter dog. Her choice of men is the only complication.

The story evolves around the fear of terrorism and the people who are engaged, whether through religious belief, or the money to be gained by corruption, in illegal activities on our extensive coastline. Her close-knit Dash 8 flight crew is also drawn into the mystery surrounding Rafe, the Customs officer assigned to their surveillance flights. When Rafe confides in Morgan the brief he has been given it is the beginning of a thaw in their relationship. The dramatic events which follow make for a good read.
There is action galore and romance too if the reader is a devotee of that genre, to which this book tends to lean.
Young’s characters are mostly credible and she incorporates the laconic Australian speech and humour smoothly into the dialogue.
The reviewer was also impressed by the evocative descriptions of the terrain, and unselfconscious use of the names of local landmarks.